Underwater welding is a complete lifestyle which is different to many other professions carrying such risk-factors. As the risk gets higher, the pay doesn’t always match equally and the welders are left in the open to dry both in life and in their death.

It’s going to come as a shock to many upon learning the underwater welding death rate, because it’s way higher than most other jobs at this pay scale or skill level. With an increasing number of underwater welders each year, the death rate isn’t declining as much as should have been.

There are many risk factors in underwater welding that are currently being taken care of, but it’s not enough because the numbers suggest otherwise. The death rate itself is the living proof of the shortcomings that these safety measures have.

I’ll invite you to take a small journey through the struggles and challenges underwater welders face frequently to make their ends meet and the extent they are willing to go – the death rate itself is suggestive enough of what these individuals have to deal with every day.

Underwater welders earn an above average salary, that too increases over time with various factors remaining under consideration. No amount of money is worth someone’s life, yet underwater welding remains as a desired profession for the amount of pay, despite the life-threatening risks that many take on a daily basis.

Is this acceptable? Certainly not! If we place it side by side with high-risk occupations and their life expectancies, you’ll realize how big of a margin there is between them and how much work needs to be done to increase that average!

As it can be made from the chart, underwater welder life expectancy sits among the lowest of the lot, if not, the lowest overall in the professional field.

Underwater welding death rate is something that’s often been undermined and a factor that hasn’t received much media coverage. A question arises at this point, does it actually require attention from the media and every individual from the society? I’ll let the facts speak for themselves.

I’ll start with the pilot’s death rate to make my argument more comprehensive. Pilots include local flying club pilots to the AirForce MIG pilots who fly over active war zones. From a report made by CDC, the death rate of pilots sits around 0.0522% a year.

In contrast, the death rate for underwater welders is an absurd number that’s placed around 15%! Can you believe it? In 2022, there exists a profession where every 3 professionals out of 20 are actually dying in the work field while the rest of the 17 still carry that risk everyday with them?

It’s unbelievable for me and yet this truth remains exactly the same with each passing day. If I put some of the riskiest professions along with underwater welding regarding their death rates, you’ll further understand how unacceptable the death toll is.

There are many reasons that underwater weldings can result in fatal accidents and recognizing them should provide information on ensuring safety from these matters. The most prominent accidental factors are highlighted here.

An underwater welder’s worst enemy is explosions. Explosions can occur at any stage of their activity – the welding gas cylinder can explode under heavy pressure at the ocean floor, or the gas or oil line the welder’s working on may catch fire from the heat coming from the welding machine.

According to some reports, around 7% of deaths of underwater welders are caused by explosions. As the welding procedure itself occurs at 10,000 degree F, it’s enough to separate the hydrogen molecule from oxygen that forms each water molecule.

Since hydrogen itself is a highly-explosive element, in certain cases prolonged welding sessions produce this consequence where the separated hydrogen functions as a literal dynamite which can cause explosion enough to blow up the entire working crew even at that much depth.

Being electrocuted is the reason for underwater welding death, only second to explosion. As the welders carry electronic welding devices that are powered by a strong generator relentlessly, there’s a good chance that the high water pressure may intervene with the generator’s housing if the quality isn’t up to the standard.

While electric shock is a common phenomena that every underwater welder deals with frequently, chances of electrocution increases when the machines aren’t regularly maintained or aren’t certified to withstand the excessive water pressure.

Also, there’s a great risk that causing death is the fault in the electric supply line. It can be a loose socket or a damaged cable – whatever it is – the welder is the first one to fall victim to the damage and has to pay the highest price.

Decompression illness used to be a highly common reason for underwater welders to die in the work field. The illness in medical terms is called Barotrauma which causes the bends if the decompression is done rapidly without proper methods and using incorrect instruments.

Let me break it down further. The underwater welders carry an oxygen tank for their breathing support which is infused with nitrogen. This nitrogen dissolves with blood and remains neutral.

But in case of superfast ascension, the water pressure decreases drastically around the body which separates the nitrogen from the bloodstream. When this happens, bubbles are formed inside the body around tissues which makes the body bend out of control.

However, it has treatments nowadays in decompression chambers that can dissolve the bubbles without damaging the body. But, it needs to be done fast because otherwise it can be fatal as it has been for a long period of time in the past.

Hypothermia happens due to extreme low temperature that freezes motor functions initially and leads to stopping the heart from pumping blood. This is a common occurrence in the polar areas, but resembling consequences has been a factor in deep sea diving as well.

Underwater welders have to go very deep down in the ocean to perform their tasks, which often takes place at the ocean floor. The temperature down there can be as low as 39 degree F, which is enough to cause hypothermia if the welder isn’t wearing necessary equipment.

Without proper insulation, a welder will easily face loss of respiratory functions with a very low core body temperature. These possibilities can cause death at any given moment of a welding job that doesn’t follow protocols.

Diving gears can malfunction if they aren’t properly taken care of regularly, and underwater welders are frequently trained to perform certain tick boxes before each of their dives. However, there have been cases where the gears malfunctioned despite all the checks that resulted in death of the welder.

Malfunctions include disruption of oxygen flow from the tank which can occur due to a faulty transfer pipe or a loose socket that fails to deliver the oxygen. Usually, surrounding workers help out the one in distress if such happens, but the troubled welder must remain calm and handle the situation swiftly without any delay.

Otherwise, low oxygen consumption can cause the brain to hallucinate which can cloud the judgment easily and prevent one from reaching out for an easy escape from death.

There are many territories underwater that are shark prone, yet the urgent and necessary welding task needs to be completed. There are many ways to prevent shark attacks while working in those certain areas, avoiding precautions did result in fatal consequences for underwater welders on more than one occasion.

Sharks usually don’t attack a group of people and prefer to keep their distance. But if a welder strays further from the group in such a territory, chances are he’s going to become a victim of the next shark attack on that area.

What might surprise you is that, nearly 3% of divers each year die by a shark attack, so the risk isn’t redundant at all and it calls for safety precautions even more during welding works at particular areas of water.

Other than freezing temperatures, high water pressure or shark threats, there are other environmental hazards that can cost the lives of underwater welders. One such factor is the high current that’s different to handle at that depth of the ocean.

High current can not only disrupt a smooth welding operation, it can also pull away welders if they haven’t taken precautions against it. Precautions can range between tying safety ropes to the welding area to carrying heavy machineries.

Another hazard is the lack of visibility. In freezing temperatures and very low light settings, an underwater welder doesn’t have the luxury of daylight’s clarity at that depth. Such adversity makes room for accidents, and even the loss of lives for many welders.

Is There Any Compensation For Underwater Welding Deaths?

The monetary compensation for underwater welders depends on the company that they’re working for or the insurance that they’re under. In some cases, the newcomer welders aren’t given any compensation at all if they sign a risk-agreement before getting the contract where they hold no one accountable for their death.

Others can receive compensation between $10k to $100k based on the factors mentioned above. While underwater welding is a relatively high-paying job, the monetary compensation isn’t really sufficient to support the families of the deceased even if I disregard the emotional loss that they are bound to face.

As these absurd numbers remain untackled with, the underwater welding death rate isn’t fluctuating much from 15% of the entire community. It’s unbelievable that in 2022 there exists a well-recognized profession where workers are willing to work knowing that they might not return home with so many risk factors lying around at each corner.

In my opinion, no amount of money can be worth an individual’s life. The underwater welders are the victims of a system so corrupted that fails to take into account a person’s life and deals it as a commodified object.

As the risk factors are identifiable and solutions can be made available for everyone to minimize the risk factors as much as possible, only the willpower of welding companies and national policies stand in the way of reducing the death rate for underwater welders.

It’s a shame that a civilized world is dealing with death tolls of such a high number in a profession that contains living human beings. It must be brought up, researched on and be talked about as much as possible to highlight it as a major issue that needs to be fixed immediately. 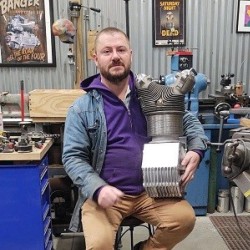 Hi! My name is Josh Mathews and I’m a professional welder residing in the state of Texas. As I’m a writer by heart, I believe it would be wonderful to share the knowledge I’ve gained over the years working in the welding industry, which worked as my initial motivation. I want others who read through our blogs to get inspired and enter the welding scene one day.